You can’t have Christmas without a bit of chaos. On Christmas Day I look around and can hardly see the carpet for scrunched-up wrapping paper. There are newly-opened gifts scattered everywhere, discarded sweet wrappers down the sides of the sofa, needles from the Christmas tree all over the floor… And I love it! It’s a scene that makes me happy because for all the mess it reminds me how lucky I am to have a family who enjoys being together at Christmas.

Come January, though, that happiness will be wearing thin. That’s when I’ll look around my house, see all the clutter and be desperate to get the tidy-up operation under way. The Japanese have a great word for this – oosouji, which literally translates as ‘big cleaning’.  In Japan, it’s a New Year tradition to practise oosouji. During the last week of December, everyone cleans, de-clutters and organises their home ready for the coming year.

I think it’s a brilliant idea. Don’t tell my children but I’ll be insisting on a bit of oosouji in our household before the clock strikes midnight on New Year’s Eve. They’ll be responsible for tidying their rooms and putting everything neatly in place. Now I have to admit that their job is going to be made easier with my Sorting Box, a toy storage box that has three separate compartments. What they put in there is up to them and they can hardly complain about clearing up when the box makes it super-easy to find what you need. 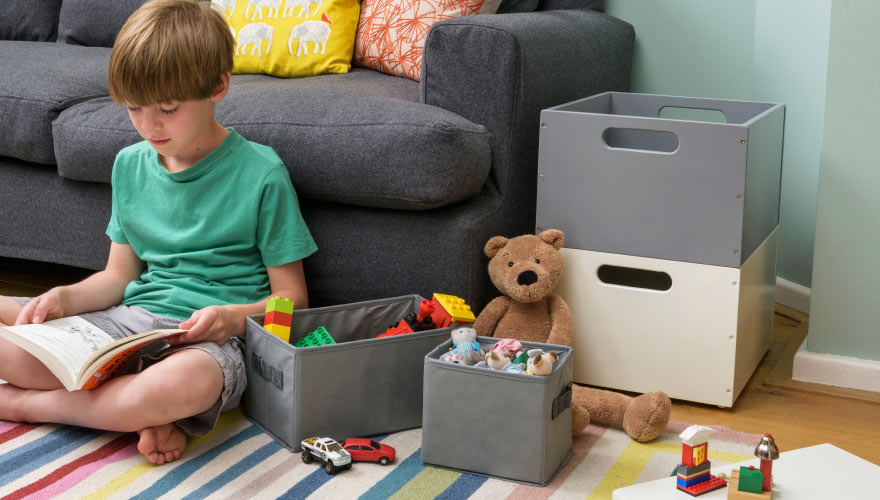 In fact, that’s exactly the point of the storage box. It was designed to keep kids’ toys and games stored neatly in an organised way. Instead of throwing all their things into one seemingly bottomless box, kids can put their Playmobile together in one compartment or use the three separate spaces for different Lego bricks. It’s really nice, actually, because kids get to choose where their bits and bobs go – but at the same time everything is nicely contained in one chic-looking box.

Of course my children, at 12 and 16, are a little too old for a toy storage box but handily The Sorting Box is great for all ages – just swap toy trains for an Xbox, DVDs, whatever. It’s also very useful for grown-ups, for storing things like scarves, belts and make-up. Hmmm, I think I may even use mine to store my Tidy Books design tools…

END_OF_DOCUMENT_TOKEN_TO_BE_REPLACED

‘Never help a child with a task at which he feels he can succeed.’ Dr Maria Montessori When my two

END_OF_DOCUMENT_TOKEN_TO_BE_REPLACED

Telling the time is so natural to most of us, that we forget kids don’t have the same concept of

END_OF_DOCUMENT_TOKEN_TO_BE_REPLACED

Parents are taking the design of their children’s room very seriously.  When Tidy Books was selected to be part of

END_OF_DOCUMENT_TOKEN_TO_BE_REPLACED

Tidy Books has been selected by leading interior designers to showcase the latest trends in home design.  In an exciting

END_OF_DOCUMENT_TOKEN_TO_BE_REPLACED

It always amazes me that just when Christmas is over and you realise how much money you’ve spent on cards,

END_OF_DOCUMENT_TOKEN_TO_BE_REPLACED

Designing for Kids, Getting Kids Reading, The Tidy Books Story

Christmas Presents Ideas for kids. When less is more at Christmas

Finding Christmas presents ideas for kids is always a challenge. I remember one of my first Christmas Days in

END_OF_DOCUMENT_TOKEN_TO_BE_REPLACED

A new library for Beanstalk, for Giving Tuesday

We asked you to help Beanstalk, the children’s reading charity, create a welcoming library.  Giving Tuesday,  28th November, is the