‘Never help a child with a task at which he feels he can succeed.’
Dr Maria Montessori

When my two children were tiny I remember watching them crawl around the house, slowly getting to know their territory. Bit by bit, their inquisitiveness took them further as they discovered new and exciting places around the house. As I hovered nearby, keeping a watchful eye, it was wonderful to see that sense of independence forming in my kids at such an early age.

Letting children explore and learn on their own is something I’ve always felt strongly about.  And in that, I’m very much aligned with the Montessori way. Dr Maria Montessori’s philosophy was about allowing children to develop naturally and independently. She believed that children should be free to make their own discoveries and to learn for themselves by ‘doing’ and ‘experiencing’.

My very first design, the Tidy Books bookcase, was made with that guiding principle in mind. I wanted kids to have their own special little library so they could pick out their favourite books whenever they wanted rather than having to wait until it was ‘time to read’. So many parents have told me that because of the bookcase their children are reading at every opportunity – which makes me really happy. 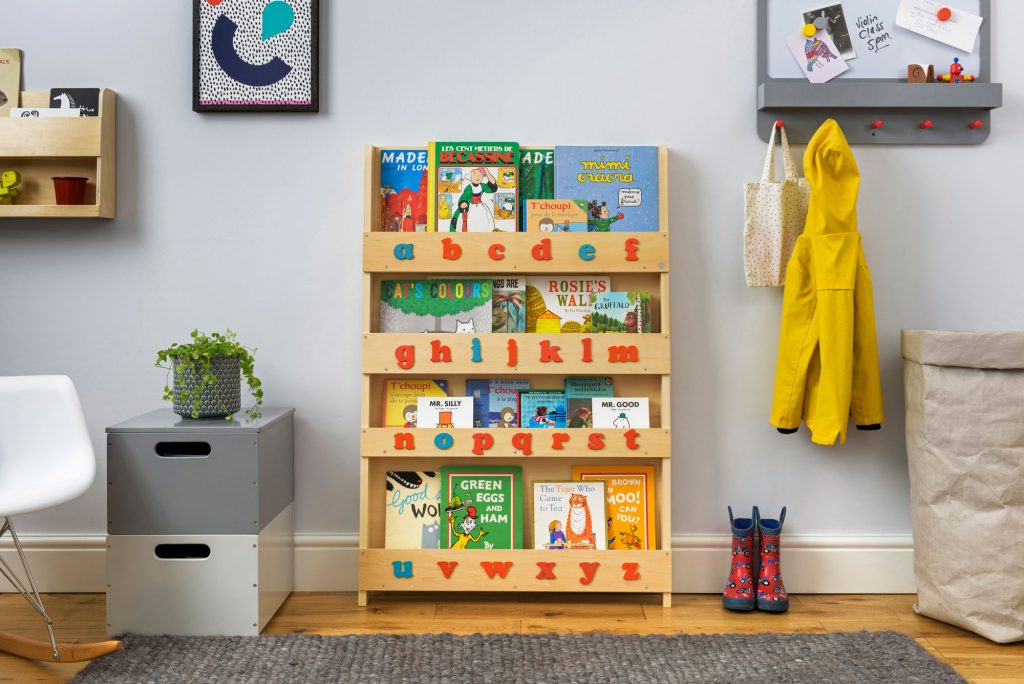 The bookcase is also useful for learning the alphabet.  My daughter, Adèle, used to love pointing to the colourful letters and running her fingers around the tactile wooden shapes. There was nothing forced about her learning – she just did it gradually, in her own time, without me pushing her.

From recent market research we’ve done here at Tidy Books, I know that many customers are interested in the Montessori way of teaching and would like to bring elements of it into their home. In response, my original bookcase will now also be available with the alphabet in Montessori colours – a simple colour scheme of blue for vowels and red for consonants. And the wooden letters are all lower case – which makes better sense to children as these are the predominant letters they see when they read.

I love that I share so many values with the Montessori way of teaching. From the very beginning, I set out to design products that made sense to kids and would help to foster their sense of independence. I’ve watched my own children interact with all my Tidy Books designs and seen them grow up to become creative, self-sufficient adults. As a parent and businesswoman, that’s a pretty amazing achievement.

* The new Montessori-inspired bookcase is available to pre-order now for delivery in early July.  Send an email to info@tidy-books.com with subject line ‘Montessori’ to claim yours.

Facebook Twitter Email Pinterest linkedin
Ever since I can remember I’ve loved reading. As I kid I couldn’t wait to open a book so I could be transported to new places, meet dif...

END_OF_DOCUMENT_TOKEN_TO_BE_REPLACED

Telling the time is so natural to most of us, that we forget kids don’t have the same concept of

END_OF_DOCUMENT_TOKEN_TO_BE_REPLACED

Parents are taking the design of their children’s room very seriously.  When Tidy Books was selected to be part of

END_OF_DOCUMENT_TOKEN_TO_BE_REPLACED

Tidy Books has been selected by leading interior designers to showcase the latest trends in home design.  In an exciting

END_OF_DOCUMENT_TOKEN_TO_BE_REPLACED

It always amazes me that just when Christmas is over and you realise how much money you’ve spent on cards,

END_OF_DOCUMENT_TOKEN_TO_BE_REPLACED

Designing for Kids, Getting Kids Reading, The Tidy Books Story

Christmas Presents Ideas for kids. When less is more at Christmas

Finding Christmas presents ideas for kids is always a challenge. I remember one of my first Christmas Days in

END_OF_DOCUMENT_TOKEN_TO_BE_REPLACED

A new library for Beanstalk, for Giving Tuesday

We asked you to help Beanstalk, the children’s reading charity, create a welcoming library.  Giving Tuesday,  28th November, is the